How to achieve the awesome black and white PC build

Kachkol Asa is a Full Stack Web Developer with rich experience in the field interested in gadgets & programming software. 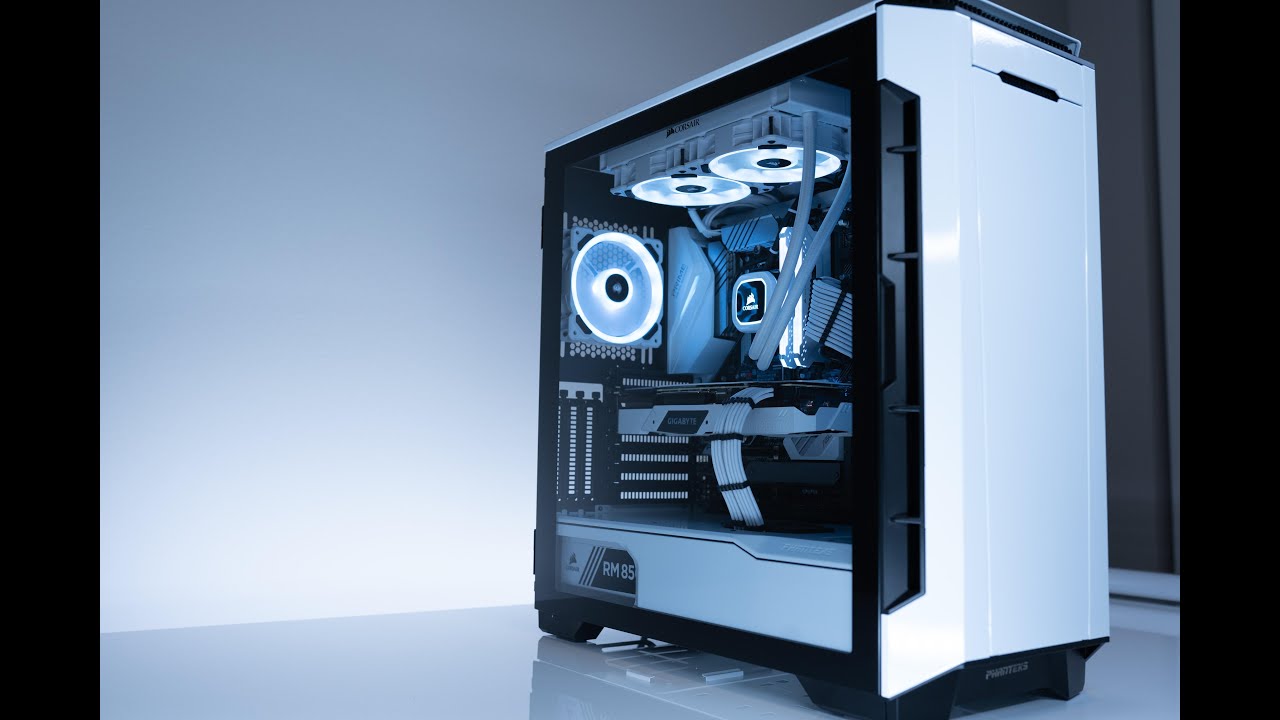 Customizing your own pc build is every gamer’s or even a tech savvy’s dream. It’s an end goal, which is quite rewarding. There’s nothing like the feeling of hitting the power button and watching the desktop come to life, a whole entire world trapped in that single screen, powered by multiple tiny pieces, and you chose every single one of them. So precisely, you chose everything to match your black and white pc build.

But how do you do that? Well, here’s your detailed guide on how to achieve a black and white pc build.

What is a PC Build?

Before we start, let’s define what a PC build is. Contrary to a prebuilt PC system, it’s constructed from available pieces, defined as commercial off-the-shelf components. You have the freedom to select each component accordingly to your budget, aesthetic and requirements so that your personal build is perfect for you.

It can be done in three ways

Decide Budget for your Black and White PC Build

The second step is deciding your budget. It can be categorized into 3 plans:

Firstly, you visualise your build and aesthetic. Take a piece of paper and a pen or open up your phone and start noting down the main thing you’re aiming for. Having a vision before starting can make all your component’s selection a lot easier and less overwhelming. You can even sketch it down to help you visualise it better!!

Let’s start with the most obvious one, you make sure all your components match the theme, especially the casing. The case comes in various patterns and colours and textures, hence there’s a large variety to choose from, for either colour black or white. It’s compulsory to ensure all of the component’s shape (e.g., fan) should be complementary to your desired vision.

A very important custom is LED lights. They help bring the entire system to life, by adding an attractive glow to it. LED lights are available in different qualities and their brightness and price depends on it. To add even more flare, you can order an RGB lighting kits, programmed to light up in coordination to your PC activity. LED lights are compact, easy to install and overall pull the entire look together.

Many small business and corporations alike, sell custom made key caps, giving you the freedom to design your own keyboard to your taste and build.

You cannot achieve the uniformity of a black and white pc build without making sure your desk, chair and small decor fits in the aesthetic. Buying a desk with material, colour and structure similar to your entire PC build and having a matching chair helps complete the setup. Lastly having matching decorations and necessities (e.g., mouse pads) are the final touches that complete the picture

And there you have it, your guide to achieving black and white PC build. To some it may seem excessive and maybe even unnecessary, however when you choose every component with such care and thought the sentiment attached to the end piece is incomparable. There’s nothing like the feeling of being able to design and use your own comfort place, which for many is their PC set up.

Here are some recommended Chairs and Setup for your black and white pc build.

Now let’s get to the main event, the components. There are 10 main components to complete your build. Each one has been described below, with their specifications and recommended models.

Before you start, you need something to hold the system, hence you start with a case. It holds all the tiny components together for their efficient working. They are available in numerous different shapes, aesthetics and style, but assuming you’re reading this article, you’d like to get either black or white one. It’s important to note that each case only stores the specific system it’s intended for.

Depending on how well-ventilated the case is, the materials used in its manufacturing, and aesthetics, the price ranges from $50 to as high as $250.

It is through the motherboard that all the components connect. It provides a platform for transferring pathways, data and power throughout the system. It also defines the connectivity of the graphics card, storage device and other extensions. Choosing a motherboard not complimentary to your system can lead to extreme bottlenecking in the working of the GPU, or in the worst-case scenario; the circuit blowing up; hence it should be chosen in accordance with your CPU and MPU requirements.

The CPU is often described as a brain for a computer. It possesses the ability to receive, decrypt and give commands according to the data you’ve input into the system. Without the CPU the system would not be able to comprehend a command and act accordingly, hence, it’s important to choose a suitable CPU. Some to consider while selecting are, the usage requirement, number of cores, speed and overclock, processor compatibility and graphic integration.

Intel and AMD are two leading brands, that provide the most powerful and efficient CPUs, well within your affordability range. In terms of money and functionality, the Intel core I series has been categorized in the following list.

Graphics or video card is abbreviated as GPU. It makes the processing of images and video data in its own internal clock and does calculations in its calculator, thus lessening the burden on the CPU, and making the system more efficient. It also maintains and betters the fluidity of your video and image graphics. It’s essential for helping accelerate the running of your PC system and achieve a high-resolution gaming experience. However, it can be costly. Along with the CPU, GPU makes up most of the cost of the entire PC built.

GPUs come in two types, namely discrete and integrated. As the name suggests integrated GPUs are linked within the CPU and share the same memory. They are essentially only built to support the regular

use of the CPU. Discrete is an external card that is assembled in the pc system and has its own memory. For better efficiency for hard-core use of PC, a discrete GPU is recommended, and PC would quite literally not function without it.

NVIDIA and AMD, are the best brands to get your own GPU. NVIDIA’s Quadro series and AMD’s Radeon pro series, are the most recommended as beginner friendly. Both have their specifications, and one may make the decision only relative to their PC’s intended use.

What is the use of all the components if you do not have anything to display them on? Here’s where a monitor comes in use. It’s a large screen that connects to the CPU and displays all the data.

1920×1080, the monitor can be used for beginners. For a much better view, it can be upgraded to 2440×1440 and even 4K which is 3840×2160. You can get an even more luxurious monitor by choosing a higher refresh rate of about 144Hz and 240 Hz. However, it should be noted that a monitor should be selected in accordance with the GPU and CPU for a more complementary system.

Although it can get quite expensive, it brings the entire system to life, and really allows you to interact with your own custom build, hence truly worth the money.

A processor is only able to function to its best abilities when it has fast-running RAM. It is also described as a computer’s short-term memory. When you give a command, the process has to fetch the relevant algorithm and data in storage, which as expected can be time-consuming. RAM tackles this problem, by temporarily storing the data and algorithm for the next use until the PC is restarted. It refreshes and deletes all the stored memory. Therefore, RAM can never really be full.

The larger the RAM the more memory it stores and resulting in a quicker PC. 8GB RAM has the capability to carry out basic functions, while 16GB RAM and 32 GB RAM (although costly) can carry out extreme gaming loads. RAMs can be found in multiple variations, hence only one type cannot be said to fit all.

Every device has built-in storage, where all the files, applications, photos, videos and almost everything are stored. It is important to have a storage size compatible with your needs so that all your data be stored safely. Storage can be one of two types, HDD (Hard disk drive) and SSD (solid state drive)

SSD is relatively much faster, makes less noise and is far sturdier than HDD. Nonetheless, HDDs are still important. With great adaptation, comes a great price, hence SSD is far more expensive per unit GB than HDD. HDD is used to store larger files and data that needs to be accessed less actively, while SSD can store operation system and files that are accessed more often.

HDD costs about $0.04 per GB, while SSD cost $0.19. Since it’s a PC you’re building, you have the advantage to customise your own combination of SDD and HDD storage as per your needs.

Although it can be ignored in the case of a basic PC build, it holds an integral role in building a high-power build. It’s named after the role it plays. It maintains, supplies and stabilises the power supply to the entire system, relevant to its demand. Especially if your build has high-end components, it’s compulsory to have high wattage and a highly efficient power supply unit. Not having one can result in abnormal heating up of the build and in some cases, even result in dangers of short circuits.

It’s worth mentioning, the power wattage needed by your system cannot be assumed, but should be well researched for and calculated by keeping in mind all the components and their workload.

Depending on the workload on the CPU, it can often cause it to heat up, and decrease its productivity. Therefore, a proper cooling system is important. Fan based solutions and AIO (all in one) solutions are available in market, that can be installed in the case to help cool the CPU down. There isn’t much of a criterion for choosing one, except its compatibility with the components and their placement.

You’ve built your PC you can see it too, but how do you interact with it? For that we use a keyboard and a mouse. The mouse helps you move the cursor, while the keyboard allows you to input numerical and alphabetical data. Choosing the right mouse and keyboard is important for your comfort, and that’s probably the only important thing to consider while buying an appropriate device.

If you are looking for a budget friendly gaming laptop for your setup. Checkout the attached article for gaming laptops under $300

Reach out to us for sponsorship opportunities

Want to be write for us? Or do you have a great product do you want us to share, get in touch!